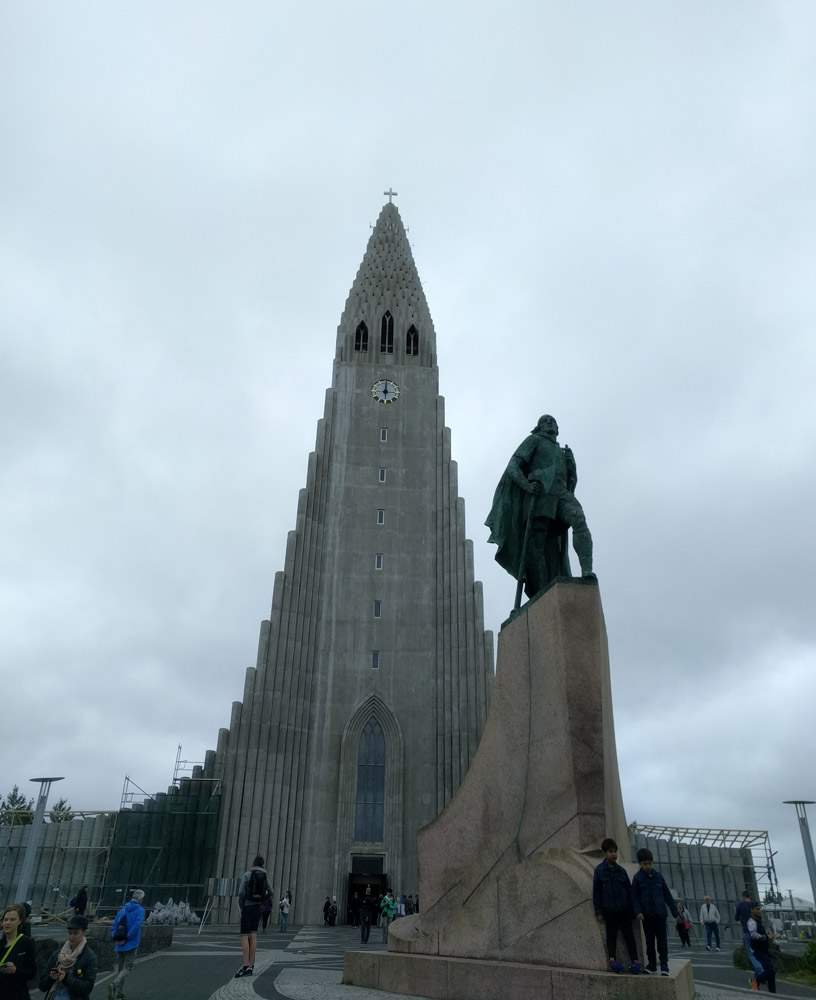 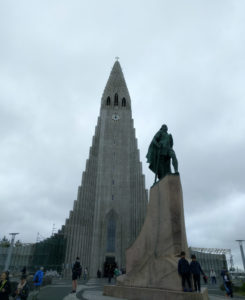 The famous Hallgrímskirkja church in Reykjavik.

I’ve been meaning for awhile now to write up a quick summary of our time in Iceland, particularly Reykjavik.

So now that I finally have some time, I wanted to quickly share my first impressions of Iceland. It’s a place I had always dreamed of visiting so it was extremely fulfilling to see it firsthand. And being the first stop on our epic year-long expedition, it was even more profound.

Iceland first hit my radar as a kid reading about the viking explorers and settlers. Many years later, while watching TV, I happened upon a Bjork documentary. I’d had only had a passing interest in Bjork previously but as I gradually became engaged with the show, I became transfixed by the raw talent and creativity. I immediately ordered all her CDs and began reading everything I could about her and the fascinating place she came from. I had a similar experience with Sigor Rós. When I first heard the band on the radio, I found them annoying and repetitious. But as time went on and I dipped a little deeper into their catalog, I started to understand a bit more until finally it clicked and then I GOT IT. I mean, check these guys out:

Anyway, as you can tell from just those two prominent samples of artists from Iceland, something about the area offers the mental freedom to explore creation outside the norm and gives an almost mystical influence to the music. I knew I had to see this place.

So rather than push it down the bucket list for some unknown date, we decided to move it to the beginning of our trip to break up the flights. We left Seattle at the height of summer, that rare part of the year where sun is guaranteed nearly every day. A few hours later we stepped off a plane into a driving rainstorm. Worse, for some reason, they unloaded us far from the terminal so we were nearly soaked by the time we reached the transport bus.

From then on it was either rainy or cloudy the rest of our time there. Cold at times, occasionally enclosed by thick fog. Did it dampen our enthusiasm for Iceland? Not at all!

We only had a few days, but we managed to squeeze a lot in. Some highlights:

Iceland is blessed with some of the cleanest air and water on the planet. Combine that with an educated population that isn’t out to exploit every possible resource and you get lovely fresh, healthy food. The only drawback: it’s very EXPENSIVE. Fortunately we stayed at a vacation rental with a kitchen and saved quite a bundle by cooking at home. 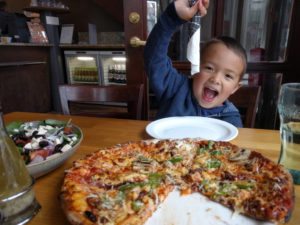 Our favorite thing to eat at home? Fresh berries and delicious, magical skyr. Skyr is a famous Icelandic treat. Basically a thick yogurt but so much more than that. I’ve heard it is possible to find skyr in the U.S., but word is there is only one brand that is similar to the real stuff you get in Iceland. Here in Spain we have found skyr for sale, but it isn’t the same; overly sweetened with a funny consistency. 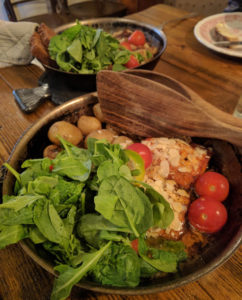 We enjoyed some decent pizza one night (Z was a fan in case you couldn’t tell by the picture) but our favorite were these “fish pans” and a fish soup from Messinn Seafood Restaurant. Served with a hearty bread, these pans are delicately prepared fish in a thick, flavorful broth, along with small round potatoes topped with various veggies. Just amazing!

Not everything was perfect, though, of course. Craving a burger and thinking they’d have some kid-friendly food, we visited Íslenska Hamborgarafabrikkan, the big burger joint of Reykjavik. 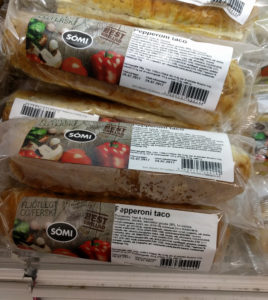 There we spent a small fortune for a VERY mediocre burger. I’d recommend giving that a pass next time you’re there.

The grocery store near our apartment was very tiny by American standards but it had pretty much what we needed for a few days and many things we didn’t. Like these “pepperoni tacos”. Maybe they’re tasty, but I wasn’t about to waste my food-tasting bravery trying to find out!

There is a lot to do in Iceland and Reykjavik in particular. We feel we experienced just enough to tempt us into coming back. However, in the few days we were there, we made the most of it. Highlights: 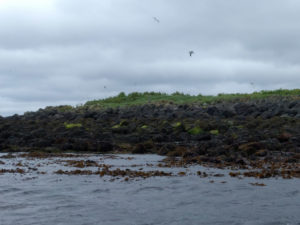 This boat tour takes you out to a rocky island that is the home to a massive population of puffin (puffins? – not sure). While it’s hard to see the wildlife, it’s still very interesting and a fun trip. My favorite part of the trip was actually seeing very pretty Reykjavik views from the water. 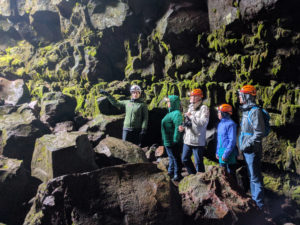 A guide will take you through the Raufarholshellir Lava Tube. Worth it!

Located some distance out of town, this tour takes you under the earth where you can see the geological record of the volcanic island. The third-longest lava tube in Iceland at more than 1,300 meters long, it’s a fascinating look at how our world was created. But, let’s be honest, the real fun is going into a cool cave. Since Z says he wants to be a volcanologist when he grows up, it was a must-do for us. 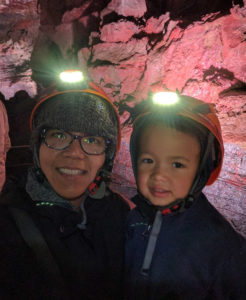 The cutest spelunkers I know inside the Raufarholshellir Lava Tube.

There is some rough terrain inside so those who have difficulty walking might want to skip this one. Z, at nearly five years old at the time, enjoyed his visit but did get tired by the end. The company supplies helmets with lights. Bring solid walking shoes and dress warmly.

We decided to visit the Whales of Iceland Museum while we were walking around the touristy/historic area of town. While it was walkable from where we were, it turned out to be much farther than it seemed on the map. It was also not a very pleasant walk, on busy streets. Inside, you’ll find foam rubber whales that are hanging from the ceiling. These actual size models are cool to see, but unless you’re really, really interested in whales, it gets boring quickly. And that’s it. Lots of foam whales, a few video displays, a few whale body parts in cases, a cafe and that’s about it. Definitely NOT worth the price unless you’re super into whales.

Just strolling around Reykjavik was extremely pleasant. Don’t overplan and fill every second with activities when you come here. Leave some time for wandering around. It’s very pretty and people are very welcoming. A few scenes from around town: 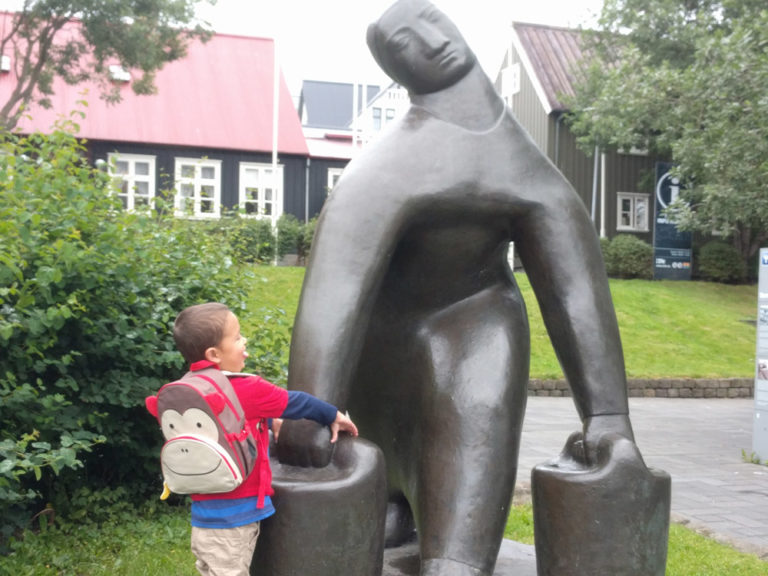 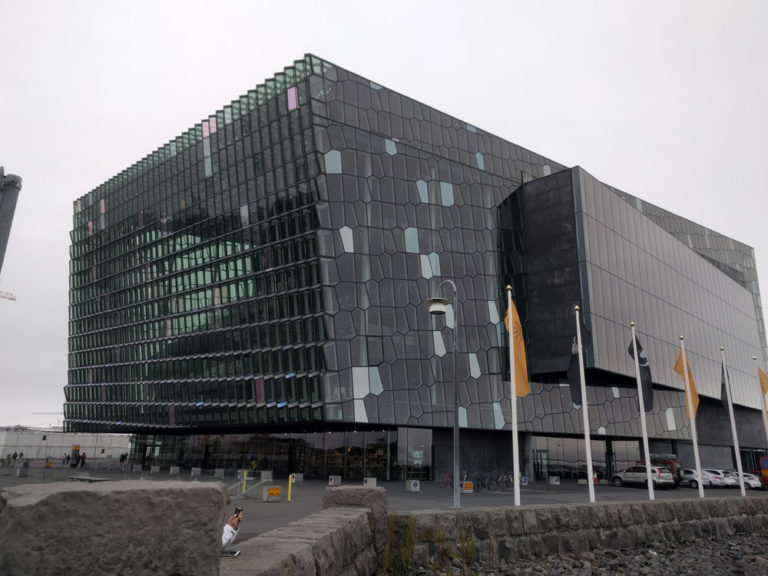 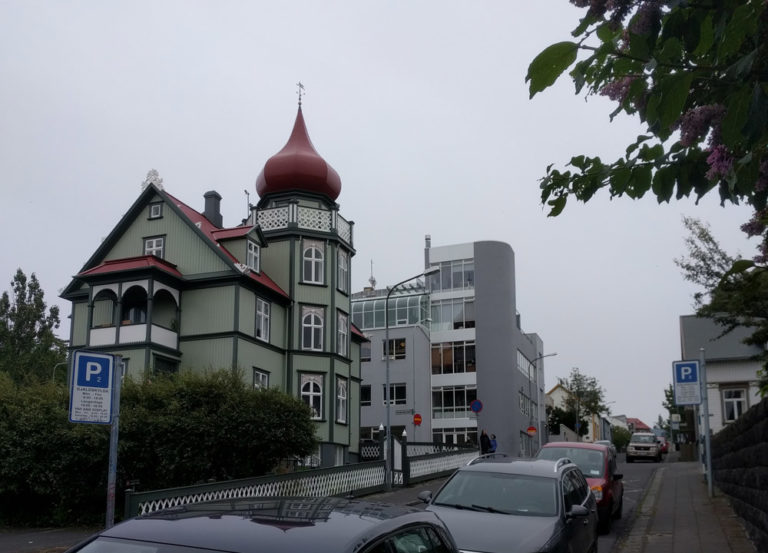 Reykjavik is a lovely mix of old and new architecture. 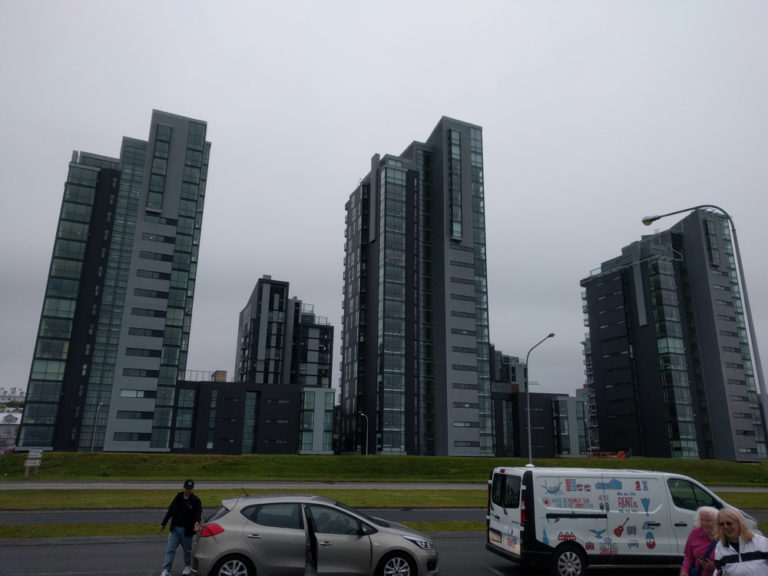 Glassy condos on the Reykjavik waterfront. 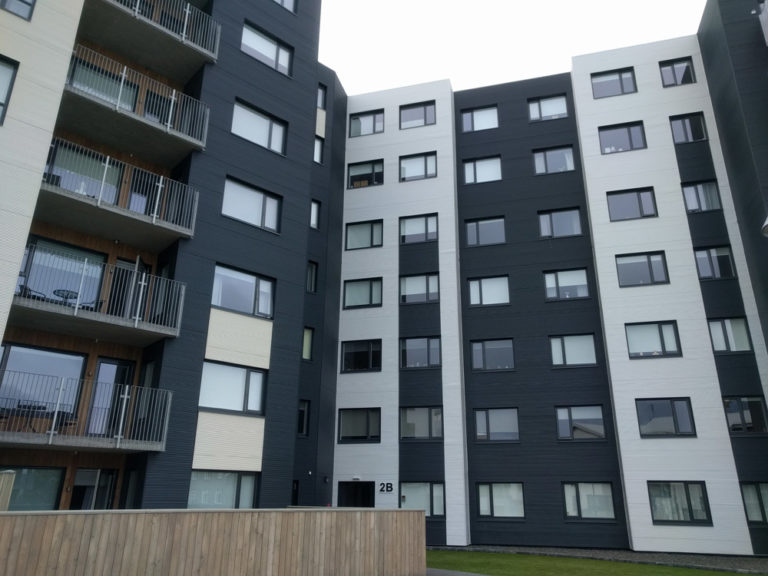 Our apartment building in Reykjavik. 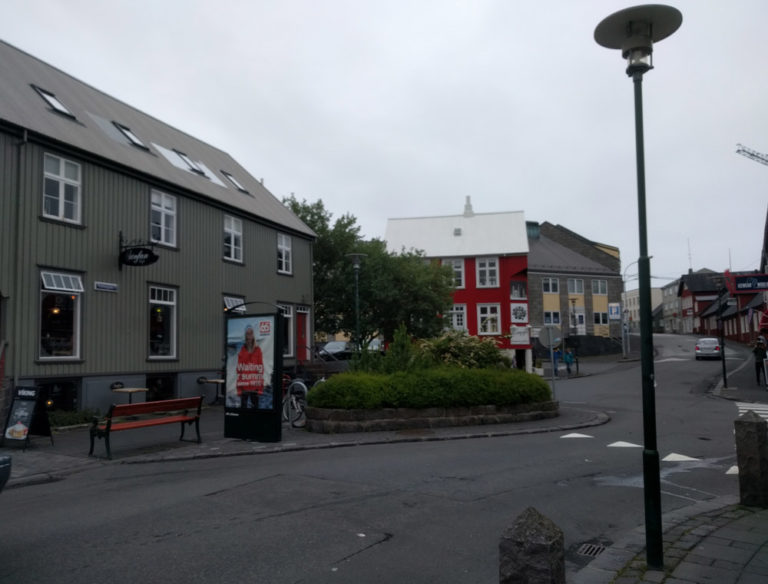 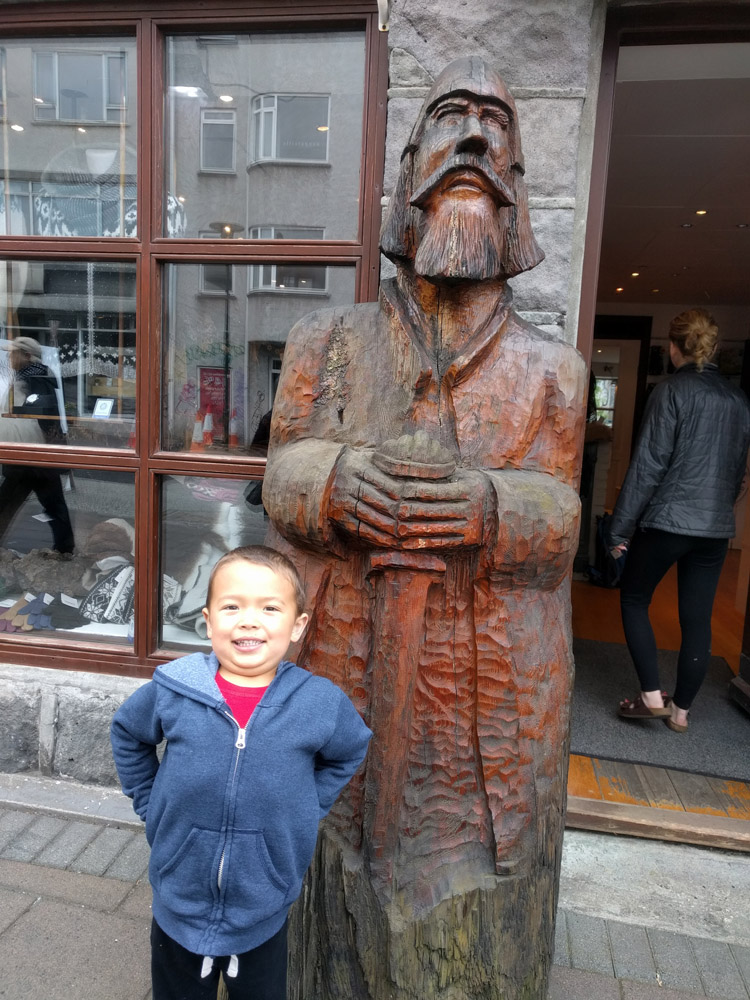 Just a couple vikings hanging out in Reykjavik.

You’ll try to avoid coming to the Blue Lagoon, by far the most famous tourist destination in all of Iceland. You’ll look around for some other mineral soaking pool or other relaxation solution. But, you’re kidding yourself. You’ll end up in the Blue Lagoon and despite your cynicism, you’ll love it and feel great afterward.

So what is the Blue Lagoon? Quite simply, mineral water from a nearby geothermal plant is collected into an enormous soaking pool. The water is a gorgeous, rich blue from the silicate in the water and is heated to a deliciously hot temperature. It’s hard to explain how large this pool is. It has to be seen to be believed. Even though thousands of tourists cycle through the pool constantly, it doesn’t feel crowded. (The locker room and showers, however are a different story.)

Although man-made, the Blue Lagoon doesn’t feel like it. I think the pools were actually carved out of the local volcanic rock, but I’m not sure. Little heating vents are found throughout the pool so you can get warmer by getting near one or you can find a cooler area elsewhere if you get too hot. There’s an area where you can get some mineral treatments to rub on your body and there’s a swim up bar for some cool drinks.

Like every mineral pool in the world, the Blue Lagoon claims magical healing powers from its water. I am sure many people suffer various mineral deficiencies and therefore probably do feel much better after a dip. We also felt great afterward and certainly slept great that night. Especially needed after all the stress in getting prepared for this trip. It’s located well outside the city near the airport so many people stop in right after their arrival from other countries to help them recover from the flight. I love the idea, but what do you do with all your stuff?

Yes, the legend is true: you are required to take a naked shower before going into the water. There are some sort-of private stalls for the shy, though. People are supposed to bring a towel down to the pool area so you don’t drip water everywhere heading back to the changing area. But there is no real place to put your towel so people throw them all over the place. Worse, it’s steamy and wet in the pool’s “lobby” area so your towel will basically be wet when you get out of the pool. If it’s still there. Like many people, our towels were not on the hooks where we’d left them when we came out of the pool so we had to walk cold and wet to the changing area. The assistant guys who could not have been less interested in helping us (sitting around talking to their friends) eventually got my son and I some towels so we could get dressed. They’ve got some big time kinks to work out on the process side.

If you’re interested in trying to live a little bit like a local and break out of the tourist routine a bit, try visiting one of the many public pools in the area.

Picture this: it’s morning in the height of summer and the air is cold and foggy. You make your way to one of the seven public geothermal pools in Reykjavik. For around 5 euros you get an electronic wrist band that proves you paid and lets them keep track of you. You head in for a thorough shower — fully naked of course — and then head into the pool area. Steam from the mineral water is rising into the air and you ease in to the delightful warmth. There are multiple areas with different temperatures so you can find the right area for soaking or do some swimming as exercise. People in Iceland visit these pools/baths frequently and it’s easy to imagine them as a survival tool in the winter.

We visited Laugardalslaug and would definitely recommend it. It’s not as fancy, large or luxurious as the Blue Lagoon but it’s very clean and enjoyable and much cheaper. And if you can stay in the city and save money too, why not?

Until next time — thank you, people of Iceland!

If you’re thinking about a visit — especially those of you in Seattle who can enjoy a cheap and relatively short flight over, definitely make it happen. But don’t let the cheap flights fool you into thinking it’ll be an inexpensive trip. You’ll almost certainly need a car, which is very expensive. (The car rental paperwork and stickers in the cars remind you to hang onto the doors when you get out if that gives you a hint about the weather you’ll likely experience.) Food and lodging will probably largely negate your cheap flights so be prepared. Activities can add up so just pick your favorite few if you’re on a budget.

Thank you Iceland for welcoming us for a short visit. We’ll definitely be back!