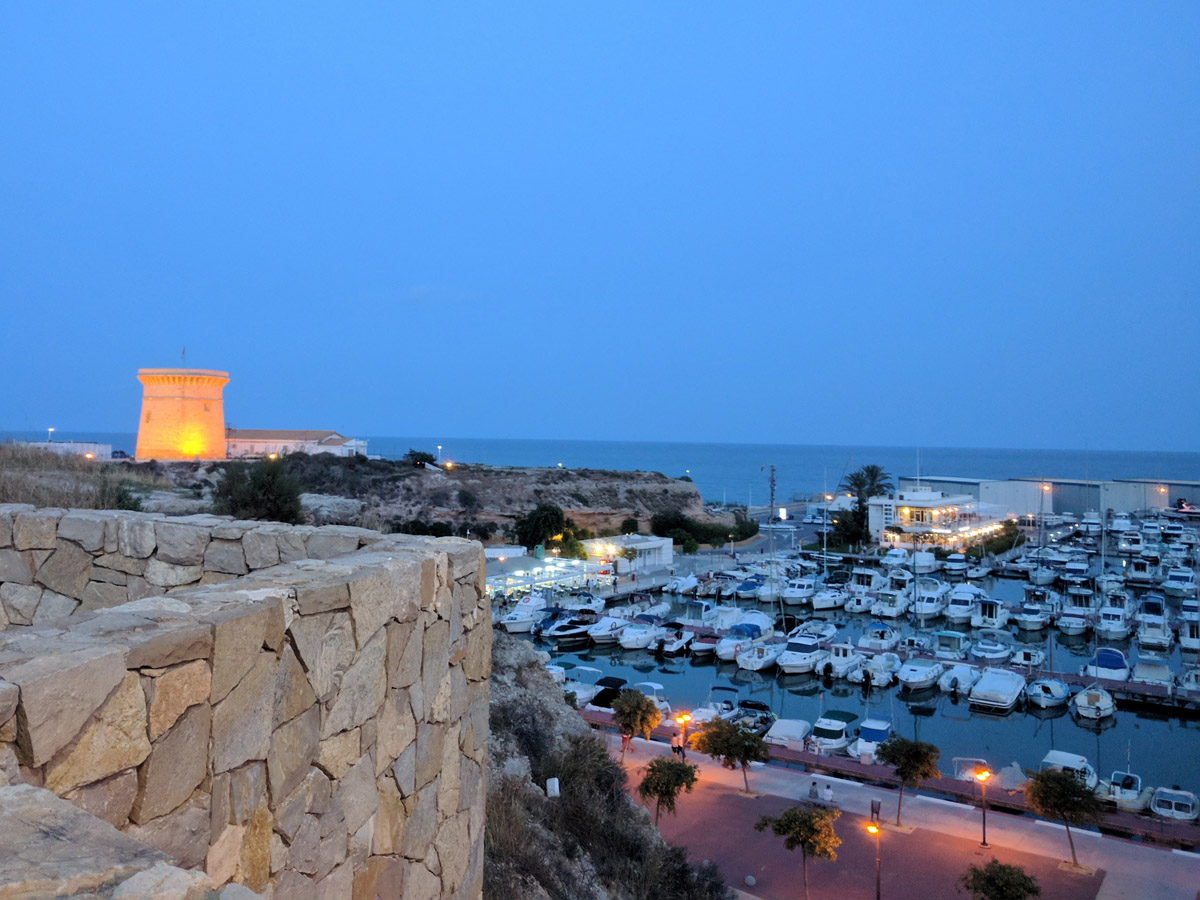 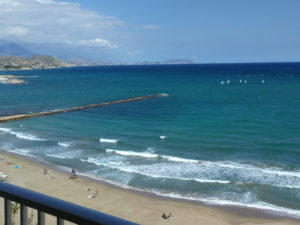 As I write this, 20 or so tiny sailboats from a local sailing class practicing their tacks as a scattered few sprawl on blankets along the shore. No umbrellas today – it’s far too windy for that. It’s Saturday in El Campello and summer has left, taking the overheated crowds with it.

As we turn to Autumn, our focus is on mundane matters like how best to commute to school, getting to the grocery stores before they close for Sunday and what to do with our now plentiful free time.

Where is El Campello and why are we here? 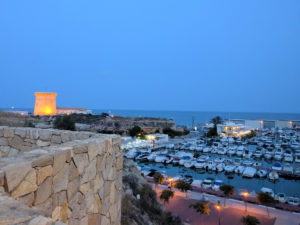 The tower of El Campello perched above the marina.

El Campello is a small town north of the metropolis of Alicante, one of the largest tourist centers of the Costa Blanca on Spain’s Mediterranean coast. The region is known for its warm climate, laid-back atmosphere and as Europe’s playground. Every August, visitors from throughout Spain, but especially England and Germany flock here to soak up the sun. But the most tourists of all here seem to be Spanish, coming from other parts of the country. We have yet to meet another American here, although we did finally meet one in Alicante city yesterday. But his mother was from here so we’re not sure he counts. 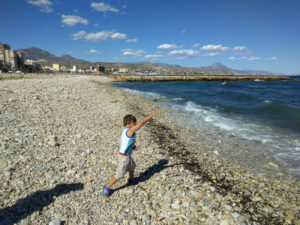 It’s not all sandy beaches here. This quality rock-throwing area is at the end of the promenade.

The main landmark in El Campello is a circular tower, originally built in the 1500s to warn of pirates. The tower is featured in the city’s logo and other prominent depictions of the city. The tower sits above the marina and there is a fish market there as well, which we have yet to visit.

We chose El Campello as our destination as it’s quite near a school that we found for Z, a beautiful bilingual Montessori, called Montessori House. Z started school this week and so far he’s off to a great start.

All about El Campello 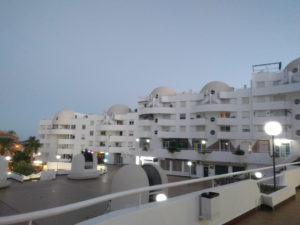 The total population here is about 24,000, according to the city’s web site, but they say that swells to 100,000 in the summer, which I believe. A lovely promenade lies between the beach and the town and it is packed with locals taking their nightly stroll in the evenings and with tourists looking for food and drinks. Beaches can be full on nice days in the summer, but never uncomfortably so. The water is incredibly warm and shallow quite a ways out. You might think all of that would draw out the party bros and drunk co-eds, but you’re much more likely to see a 70-something pensioner risking her hip dancing to terrible music than the oonz-oonz-oonz of the younger party scene. There are lots of kids around, mostly Spanish and it’s generally a walkable (except when it’s too hot), peaceful town.

We’re likely overpaying a bit for our condo, which we found through AirBnB at €1,300/month. But we have two bathrooms and three bedrooms and we’re on the beach with an incredible view from our balcony. Hard to beat it.

There is a modern tram system that runs from here (and farther north) into Alicante city, which has been handy and affordable. There is also a very nice bus system, which we use frequently, but their ability to keep to their posted schedule leaves us mistrusting it.

Right below the tower is an ancient archaeological site, which we have yet to explore. Apparently the site features remains of several civilizations, going back to the Bronze age. I’ll definitely post more about that once I have the chance to get over there. 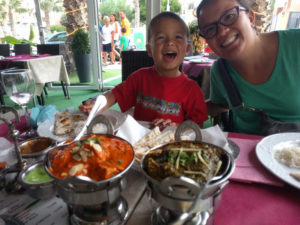 Food has been typically Spanish for the most part, but given the number of tourists coming through here, there are a few other options we’ve tried, including British Fish & Chips and Indian food. We’ll definitely do our best to entice you into a visit with some food posts.

In addition to lovely El Campello itself, there are a number of surrounding neighborhoods and towns, which we have yet to visit. I hope to take you on a tour of a few of those in the coming days.